I want to hear from you: What issue should be Congress' top priority?

A lifelong Ohioan, Dave has dedicated his life to family and public service. After graduating with his Juris Doctorate from the University of Dayton, Dave worked as a public defender before being elected as Geauga County Prosecutor in 1988 – a position in which he served his community for nearly  25 years.

In November of 2012, Dave was elected to represent the 14th Congressional District of Ohio in the U.S. House of Representatives and is currently in his fifth term. He considers it a great honor to represent the people of Northeast Ohio and serve the communities where he was born and raised.

As a former prosecutor, the safety and wellbeing of Ohio’s communities remain one of Dave’s top priorities. He co-founded the Bipartisan Task Force to End Sexual Violence in the 115th Congress and is the Vice Chair of the Addiction, Treatment and Recovery Caucus. With Ohio being one of the states hit hardest by the opioid epidemic, Dave fights to ensure that the federal funding Congress provides to combat addiction effectively supports the lifesaving work local communities carry out on the front lines of this crisis.

Dave serves on the influential House Committee on Appropriations, which is responsible for scrutinizing federal spending and determining how your tax dollars are spent. In this role, he works to restore fiscal responsibility, which he believes is needed to create a stronger, more prosperous nation for the next generation. In keeping with a tradition he established while serving as Geauga County Prosecutor, Dave has returned more than $800,000 from his personal Congressional budget to the U.S. Treasury since 2013. 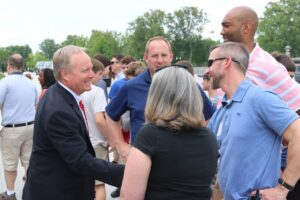 Following in the footsteps of his predecessor, Steve LaTourette, Dave is proud to put policy over politics and work across the aisle to find solutions to the challenges facing the lives and livelihoods of Northeast Ohio families. In the 116thCongress, Dave was recognized as one of the most effective and bipartisan lawmakers in Washington.

As the U.S. Constitution says in Article I, Section 9, Clause 7: “No money shall be drawn from the Treasury but in consequence of Appropriations made by Law.”

Comprised of 33 Democrats and 26 Republicans, the House Appropriations Committee is responsible for funding the federal government’s basic operations and vital activities. Through the 12 appropriations bills that the Committee considers each year, members work on behalf of the American people to scrutinize federal spending and determine how their tax dollars are best spent.

Dave is currently serving his second term as the Ranking Member of the Appropriations Subcommittee on Interior, Environment and Related Agencies. Having lived his entire life on the shore of Lake Erie, Dave understands how important it is to support programs that ensure we are protecting our natural resources and preserving them for future generations.

As Ranking Member, Dave works with the Chair, Rep. Chellie Pingree, to determine discretionary spending levels for programs within the Department of the Interior, the Environmental Protection Agency, and other related agencies, including the Indian Health Service. A full list of the Subcommittee’s jurisdiction can be found here.

The Financial Services and General Government Subcommittee is responsible for providing oversight and approval over annual spending levels for a number of agencies in charge of regulating the financial and telecommunications industries, collecting taxes and providing taxpayer assistance, supporting the operations of the White House, the Federal Judiciary and the District of Columbia, managing Federal buildings, and overseeing the Federal workforce. A full list of the Subcommittee’s jurisdiction can be found here.

The House Select Committee on Modernization

Dave is eager to work with his colleagues on the Committee to find solutions to the challenges facing this legislative body, especially how Congress can create a more meaningful budget process and make better use of technology so that the public can better access and understand what’s happening in their own government.

The House Committee on Ethics

Dave was selected to serve on the Ethics Committee for the 117th Congress. This unique Committee has three main functions.  First, the office of Advice and Education is designated to answer questions and provide ethics training to House Members, officers, and employees.  Contact with the Committee about the application of laws and rules to proposed conduct is welcomed and encouraged. The Committee’s advisory function is conducted in a confidential manner.  The Committee rules prevent an Advice and Education inquiry from being transformed into an investigation.

Congressman Joyce was presented the first-ever Great Lakes Changemaker Award by the Council of the Great Lakes Region in 2019. This award recognizes individuals, companies, or non-profit organizations that promote the long-term competitiveness and sustainability of the Great Lakes region, and who play a leadership role internationally on a range of economic and environmental issues. As a lifelong resident of Northeast Ohio, Dave has long been a fierce advocate for the preservation of the Great Lakes. As the Ranking Member of the House Appropriation Committee’s Subcommittee on Interior, Environment, and Related Agencies, he continues to lead the bipartisan effort in Congress to ensure the Great Lakes are fully protected for both current and future generations.

In 2020, Congressman Joyce received the inaugural Jefferson-Hamilton Award for Bipartisanship from the U.S. Chamber of Commerce, in recognition of his bipartisan leadership and constructive governing in the first session of the 116th Congress. The Jefferson-Hamilton award is presented to the top 10 Senators and top 20 Congressmen based on the number of bills a Member cosponsors that were introduced by a Member of the opposite party.

Congressman Joyce was presented with the U.S. Chamber of Commerce’s Spirit of Enterprise Award in 2019 for his continued support of Ohio’s small businesses. The U.S. Chamber of Commerce is the world’s largest business federation representing the interests of more than 3 million businesses of all sizes, sectors and regions, as well as state and local chambers and industry associations. Dave is proud to support commonsense approaches to legislation that helps small business and their workers succeed.

In 2020, the National Federation of Independent Business named Congressman Joyce a “Guardian of Small Business” for his continued advocacy work on behalf of Ohio’s small businesses. Small businesses account for 93.6% of all business in Ohio, contributing to job creation, driving innovation and giving back to the communities they serve. Dave has always believed in a commonsense approach to government that spurs economic growth and provides more opportunities for Ohio small businesses and all those they support.

In 2020, Congressman Joyce was awarded the National League for Nursing’s Award for Public Policy Advancement. One of the League’s highest accolades, this award recognizes Members of Congress for their contributions to the progression of healthcare, nursing, and nursing education across the nation. As the proud husband of a nurse and Co-Chair of the House Nursing Caucus, Dave is dedicated to addressing the issues that impact our nation’s nurses. He has consistently fought for increased funding for nursing education and workforce development, and introduced legislation to support frontline workers during the COVID-19 pandemic.

Most Effective Lawmakers of the 116th Congress

Congressman Joyce was ranked as one of the most effective lawmakers in the 116th Congress by the Center for Effective Lawmaking. Rankings were based on how successful lawmakers were at moving their legislative agenda through Congress over the past two years. The study included an examination of the bills each member sponsored, whether they advanced through the legislative process and were signed into law, and the significance of that legislation.

Dave is honored to represent the people of Northeast Ohio in Congress and serve the communities where he was born and raised. He works to live up to that honor every day by reaching across the aisle to put policy over politics and find bipartisan solutions to the challenges facing the lives and livelihoods of Northeast Ohio families.

Most Bipartisan Lawmakers of the 116th Congress

Dave firmly believes that lawmaking is not about one side winning and the other side losing, but rather about working together to address the needs of Northeast Ohio’s communities. He is proud to work with his colleagues on both sides of the aisle in an effort to end Washington’s dysfunction and find the common ground needed to create solutions to the challenges facing our country.

In 2020, Congressman Joyce was awarded Ohio Corn and Wheat’s Wheat Advocacy Award for his work to advance farming across Ohio. Agriculture is one of Ohio’s top industries, with farms accounting for more than 14 million acres of land across the Buckeye State. Dave understands the importance of a strong agricultural sector for our nation’s food security and economic well-being, and is dedicated to continuing to fight for Ohio’s agricultural community in Congress.